Piposaru 2001's gameplay differs from the original Ape Escape gameplay outline. The left analog stick on the DualShock Controller is used to control Spike's movement, but unlike the original game, the right analog stick was unused and the Face buttons were used to attack. The goal of each level is to use a vacuum cleaner to remove a required amount of pants off of the apes and put them into an oversized washing machine, while preventing the monkeys from re-obtaining their shorts or attacking the player. While sucking the pant off a monkey, the monkey can be fired into other monkeys to knock them out. Bomb tokens can also be collected to attack monkeys and bosses. The graphics were slightly improved yet very similar to the original game, with the same symbols throughout the game (such as the stage cleared symbol). Also, Piposaru 2001 was the first game in the series to feature no other enemies excluding the apes. It also featured many more levels than the original game. It has 36 stages while the original had only 19. Each level is timed. The storyline changed and is a similar game style to Ape Escape Pumped & Primed. There are five stages to complete, and then a boss battle in each level, much like Pumped & Primed's layout.

After the events of Ape Escape, the Pipo Monkeys that caught Spike caught in the previous adventure were sent to a "Virtual Space" invented by the Professor. However, the owner of Monkey Park reported the missing monkeys to the Government. A sanitation check will begin soon, and if the Monkey Pants are not clean, then the Virtual Space will be destroyed. It's up to Spike to collect and wash all of the Monkey Pants.

Spike only has access to one Gadget; the Nuggetcher, which is able to suck up Monkey Pants. 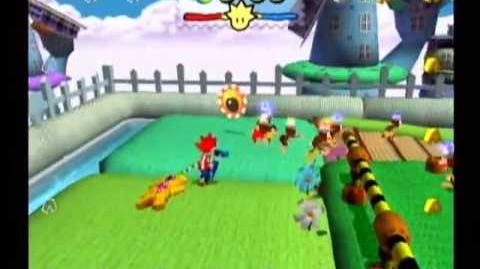