Ape Escape Academy, also known as Ape Academy in Europe and Piposaru Academia: Dossari! Sarugee Daizenshuu in Japan, is a game for the PlayStation Portable system that consists of a collection of 45 mini-games, many of which borrow from elements of Ape Escape 2. The game was first released in Japan and later in Europe and North America. By utilizing the PSP's Wi-Fi capabilities, up to 4 players can play at a time.

Each level has a certain number of lines required to pass the class (one line consists of 3 naughts, either horizontally, vertically or diagonal). The game also offers review lessons, for players that have almost met the requirements. Usually, these are mini-games that the player has failed previously. 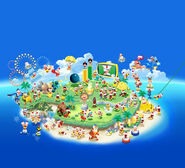 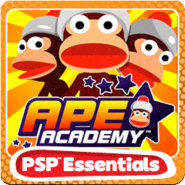 Add a photo to this gallery
Wallpapers