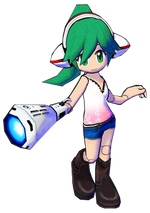 Gender
None. She is a computer program and robot that resembles a real girl. Family
As a computer program, she has no real family members, but she is shown to enjoy smiling while being with the Professor, Natalie, Spike, and Jake, especially when they are all gathered together. It can be assumed they are all like family to her. Height
Unknown Weight

She can't really age because she's a computer program.

Casi, known in Japan and some US & UK games as Charu (チャル), is a computer program that takes the form of a human girl. She appears to help out whenever she can or assists the Professor.

Casi is a pale-fair skinned girl originally with big violet eyes that became green over time, and long flowing green hair usually worn straight down or in a ponytail.

In Ape Escape and Ape Escape: On the Loose, Casi wore a black spandex outfit with white cuffs below her shoulder and around her neck, and the Professor's insignia on her chest. She also wore white socks with red, white, and black shoes, two red bracelets, and a pair of red and white circled ear pieces.

In Ape Escape: Pumped & Primed, she wears the same outfit, but now has a spider motif.

Casi is a helpful girl who appears to be formal with others. She is a nice, but quiet girl. She is a loyal assistant to the Professor and is also not quite as pushy as Natalie.

Working at the Professor's lab, she helps Spike travel through time by giving him instructions on how many apes he has to catch. She also displays the level titles and how many monkeys are in these stages.

Later when Natalie and Professor are kidnapped by Specter and his monkeys, Casi became Spike's temporary mentor until they were rescued.

Casi appears in Ape Escape 2001, providing the same role as the previous game, telling how many Monkeys there are in a level.

Casi appears to join the Hi-Tech Tournament along with Spike, Natalie, and the Professor. This in turn, makes her a playable character. After the final battle they had with the Grid Core, Casi helps everyone escape from the world the Grid Core trapped them in. They all arrived back in the normal virtual world safe and sound.

In gameplay, she can jump up to 3 times.

Casi appears in Million Monkeys. This time, she now has a physical body.

Casi makes an appearance in PlayStation All-Stars Battle Royale. In Spike's story mode, she alerts him and the Professor about an otherworldly invasion. She can also be seen in the Time Station level.

Retrieved from "https://sarugetchu.fandom.com/wiki/Casi?oldid=12420"
Community content is available under CC-BY-SA unless otherwise noted.