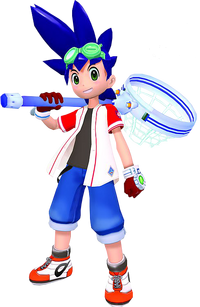 9 (in the European translations of Ape Escape 3)

He dislikes it when people make fun of other people in a mean way as his encounter with Specter and Dr. Tomoki suggested. He also dislikes the fact that Yellow Monkey has very strong feelings for him which he is totally grossed out by

Kei, known in Japan and Europe as Satoru (サトル), is the main star of Ape Escape 3, along with his sister, Yumi. Like the previous heroes, he also wants to stop Specter. He is also Yumi's Fraternal twin brother and he is slightly younger than her.

Kei wears a white baseball uniform with red sleeves and a number 3 on the back of it, and wears a black shirt underneath it. He wears blue shorts and orange and white shoes. He also wears a pair of green goggles on his hair.

As Fantasy Knight, Kei takes on a knight appearance. Kei gains a red and black outfit with tan-brown accents, worn underneath a long blue flowing cloth that covers his front and back with the roman numeral III on it. His neck, arms, and shoes are made of armor, and he gains an armored helmet with red feathery-hair on top and a pair objects resembling eyes. He has a red shield with the words "White Dogs" on it, with a picture of a white dog. Kei's weapon becomes a lance.

As Wild West Kid, Kei wears a powder blue top with red chaps, a vest, hat, and gloves, all of which have red accents and tassels. Around the neck is an orange neckerchief, and Kei also has a pair of dull brown denim pants, and bright brown shoes with tan straps and blue wheels on the back of them. He also gains a tall themed double holster for his guns.

As Miracle Ninja, Kei wears a sheer top with white and dark gray accents, brown fingerless gloves with white detailing, and a semi-baggy pair of dark gray pants held on by a bright red cloth with bronze plates on the knees. He also has sheer material covering his legs, a pair of dark gray socks with ninja sandals, a loose, flowing orange scarf, a mouth piece, and a pair of teal goggles with two straps around his head.

As Genie Dancer, Kei wears a red vest with gold detailing and a thick, puffy pair of white pants with a blue sash on top, where a golden object sits with a weapon concealed in it. He also gains a pair of dark berry flats with emerald gems and matching armbands, ruby earrings, a gold necklace with emerald gem on it, gold bracelets below the shoulders, and a white turban with a single dark blue feather in the center above a red gem, where Kei's goggles sit.

As Dragon Kung Fu Fighter, Kei keeps his goggles and normal hair, but it becomes darker in color and he gains a long braid at the bottom of his head. For it, he wears a dark blue Chinese top and pair of pants with white and red accents, a pair of black flats, and his normal red gloves.

As Cyber Ace, Kei wears a red body suit with bright yellow detailing and white accents. He gains a pair of blue robotic-like shoes, dark red gloves with gold cuffs and yellow fingers, a black and white belt to match the armor covering his chest, and a white helmet with his goggles covering his eyes and a big lightning bolt shape above them.

As a Super Monkey, Kei puts on a monkey costume. You can see Kei's face from the mouth portion of the costume. It also has a zipper on the back.

Kei, like Spike and Jimmy before him, is brave, and simple-minded. Unlike the two, he is very overconfident of himself. He also seems to be fearless, such as when White Monkey brought out a giant mech dragon, and Kei wasn't even fazed by it.

Kei arrives home with Yumi when they get a call from Natalie. She explains that the Monkeys are back and establish TV stations protected by the Freaky Monkey Five where they plan to broadcast TV shows worldwide. The television shows that are broadcast on every television put every human except the twins, Kei and Yumi, their aunt Aki, and Natalie into a mindless trance. When Natalie informs Kei and Yumi that Spike, Jimmy and the Professor were all infected by the television show, they go out to catch the monkeys and thwart Specter and Dr. Tomoki.

Kei and Yumi go to every movie set and capture all the monkeys there and destroy the satellite there. Kei and Yumi easily capture White Monkey, Blue Monkey, and Yellow Monkey. When they reach the TV Station where Pink Monkey is, Kei and Yumi's attempts to capture her fail and she escapes. They manage to capture Red Monkey afterwards.

When they reach Tomoki City, Tomoki challenges them to a battle in his giant Tomo-King robot. Tomoki, after being defeated by Kei and Yumi, and being humiliated by Specter, lets them take his rocket to space to defeat his former partner. Once they reach Specter's outer space base of operations: Space Station SARU-3, they capture all the monkeys and deactivate the movie sets on their way to Specter. When they reach Specter, he tells them his plan about how he will use his space station to cut the earth in half and keep half of it for the monkeys (leaving the other half, originally meant for Tomoki, to the humans). Afterwards he gets in his new King Gorillac Mech and tries to activate his plan. He is defeated and the two escape from the satellite, leaving Tomoki to give his life to deactivate the Twin Heavens. He survives. After Specter is defeated, Pink Monkey releases him and the rest of the Freaky Monkey Five, leaving them to be caught again in extremely similar missions.

In the mini-game Mesal Gear Solid, the Professor mentions that Kei, along with Spike, Jimmy and Yumi, are at a summer camp, which prevented them from stopping Mesal Gear.

Kei is one of the many characters that were captured by Specter when Spike and Natalie were shrunken down. He is the hostages of Yellow Monkey, but it's later revealed that it was a Specter doll disguised as Kei and stole the microchips from Spike and Natalie. He is actually held hostage of Pink Monkey alongside his sister.

Retrieved from "https://sarugetchu.fandom.com/wiki/Kei?oldid=11846"
Community content is available under CC-BY-SA unless otherwise noted.