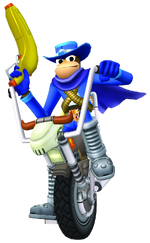 He is skilled with motor vehicles such as his personal motorized unicycle, and also has been known to use a banana pistol, a banana Gatling gun, and even dynamite bundles, when in battle.

Blue is tall and slim, and wears a blue suit that varies depending on his two current main series appearances.

In Ape Escape 2, Blue Monkey wore a blue one-piece outfit resembling a jumpsuit, with fingerless gloves, steel kneepads, and blue and silver sneakers. He wears a blue Pipo Helmet modified to cover one eye with a big white B emblem on the front. His Specter Badge is located on his belt, serving as the buckle.

In Ape Escape 3, Monkey Blue is seen wearing the same outfit, except modified to fit his Western outlaw theming. He now sports a long blue cape, fingered gloves, a cowboy hat (also serving as his Pipo Helmet), and an "X"-shaped ammunition bandolier across his chest. He is now skilled in gunmanship, sporting a banana-styled revolver, and also has several bundles of dynamite at his disposal. His Specter badge is still on his belt.

In his debut, Monkey Blue was portrayed as a highly confident speedster with the attitude of a teenager. Since then, he has matured considerably. Although he surely isn't the most powerful member of the Freaky Monkey Five, his intelligence and speed can make him a worthy opponent. He loves speed, and enjoys risky, possibly dangerous stunts.

Like the other Freaky Monkey Five members, his motif/theme changes with each game or series. He's confident and sure of himself. He has a massive crush on Monkey Pink, as seen in Ape Escape 3. Shown by a special music box he carries with him at all times that contains a picture of her inside. After beating Kei/Yumi he had desired to ask her out on a date, but it is never revealed if he ever went through with this, as he loses the battle against Kei/Yumi and is captured.

In SaruSaru Big Mission he developed feelings for Aki and while she was shrunk, he was trying to treat her to a nice dinner until he was interrupted. So it can be said, he is quite the romantic if given the chance.

Blue,, along with four other chosen monkeys, were given Vita-Z Bananas from Specter.

The first of the group to be fought, Blue Monkey rides his motorized unicycle across the battlefield, which is a four-way crossing located several feet above the ground. Each of the four bridge lanes has a big traffic light. When the light changes from blue to yellow, the player must be cautious not to remain on the bridge for much longer, because once the light is red, the bridge will collapse, which will send the player falling to the ground if they remain on the bridge.

He and the other Freaky Monkey Five appear as cameos as possible fans of the player character if unlocked because of a well performance. Blue Monkey will be a fan if the player can win the Hoops 1 challenge and gives the player a free outfit.

Monkey Blue is fought second in Ape Escape 3, after Monkey White. He is now depicted as a Western outlaw, but he retains his motorized unicycle.

During his battle, Teleborgs dressed in Western attire proceed to pop out of the windows to shoot at you. This is handy in order to obtain Cookies or morph stock should you be low on either.

For the final phase of the battle, Monkey Blue will take control of a banana-themed Gatling gun, and the player must run up to him while periodically taking cover from the gunfire. Once you come close enough to Monkey Blue, he can be attacked until he is finally defeated.

The area itself takes place in an abandoned part of the Western levels; a "ghost town" of sorts. "Wanted" posters of him can be seen when the player enters the area.

Signature Move ("Gonna Getcha!" in US, "Bombs Away!" in EU): Racing around the stage quickly, Monkey Blue throws around several bundles of dynamite. They deal considerable damage, but they can also destroy the Teleborgs if they happen to be caught in the blasts.

Aki reveals when Kei/Yumi return to the TV Station after capturing him, that he mumbles about the rules of a Wild West gunman.

Blue Monkey and the rest of the Freaky Monkey Five are used as "teachers" to the player's character.

he is the teacher for Junior Year 2, and gives the game Gran Turismonkey if all 3 Specter Coins are won.

in Ape Academy 2, he is the first boss and runs Traffic Safety Island. he needs 10 Bananas to be used. his game is I Brake For Banana. He has a Brummie accent in this game and uses fixed quotes. These include:

Heh, let's see if you can keep up

I can't let you ride right though my town

My decision is my know

Keep the foot on the pedal until you've won

Your quite a speed little fella, ain't ya

I never give up son!

Not bad son, onto the next.

Victory, it's just around the corner!

I knew you couldn't go quick enough! I win!

In the anime, Blue Monkey takes on a Indiana Jones like appearence and is themed as an adventurer. He gains a whip for a weapon this time. 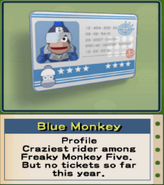 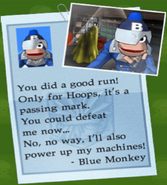 The fan mail received by Blue.

Ditto, but for Natalie

Ditto, but for the Professor.

Ditto, but for Helga.

Ditto, but for Pipo Monkey.

Ditto, but for Casi. 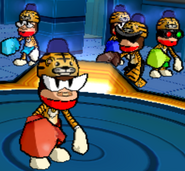 Ditto, but for Team Monkey. 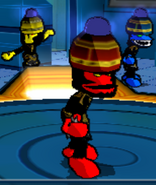 Ditto, but for the Pipotrons.
Add a photo to this gallery