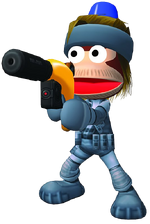 Pipo Snake (ピポスネーク) is a playable monkey in the Ape Escape 3 minigame Mesal Gear Solid. This particular monkey has every skill from Solid Snake. He even sports an uncanny similarity, in terms of appearance. Unlike Snake, this monkey cannot kill anyone and must instead stun other monkeys.

In Mesal Gear Solid: Snake Escape, Snake was tasked by Roy Campbell to destroy Mesal Gear. Unfortunately, he was captured by the Monkeys and used for ransom. The Monkeys wanted 1 Billion Bananas, or they'll fire Mesal Gear onto the world. With no one else to turn to, Campbell called the Professor and wanted the assistance of Spike, Jimmy, Kei, and Yumi to stop Mesal Gear. However they were at a summer camp, and were unable to help. So they got a Pipo Monkey with the combat knowledge of Snake, and created Pipo Snake as a result.