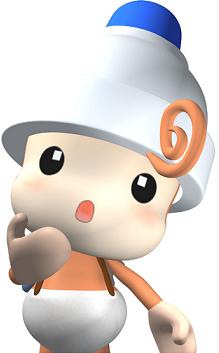 Getting away from Jimmy.

Pipotchi (ピポッチ) is a baby monkey accompanying Jimmy throughout his journey in Ape Escape 2. He is Jimmy's pet friend.

Pipotchi is a baby monkey wearing a pair of white strap-on suspenders. He also has wings on his back.

Not much is known about Pipotchi's backstory. All that is known is at some point Pipotchi was given a fake Pipo Helmet, and given to Jimmy.

Pipotchi was present when Jimmy accidently destroyed the Lab, and sent the Pipo Helmets along with Monkey Pants. Due to Jimmy sending them in the first place, Pipotchi followed Jimmy. He was also present when Specter made his return.

When Jimmy & Pipotchi were in Casino City, they ran into the Professor. After Jimmy explained what the situation was about, Jimmy left Pipotchi in the care of Natalie and the Professor in order to continue his adventure without endangering him.

When Jimmy enters The Blue Baboon, Natalie informs Jimmy that Pipotchi escaped while she wasn't looking. Believing that Pipotchi left to find him, Jimmy searches for Pipotchi while catching Monkeys.

Jimmy was able to find Pipotchi safely in Enter The Monkey.

Jimmy and Pipotchi heads to Code C.H.I.M.P. to capture Specter. However, a giant Yellow Monkey intervenes, causing Specter to flee to the Moon Base. Jimmy and Pipotchi follows him, and after a fight with Ultra Goliath, Jimmy finally captures Specter.

It was revealed that Specter faked his capture, and was devised a final plan with the monkeys that Jimmy didn't originally catch. After Jimmy catches the remaining monkeys, they head to Specter's Secret Hideout, catch him, and then returned back to Earth, and crash lands into the Lab.