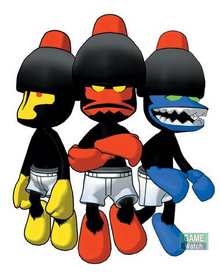 The Pipotrons (ピポトロン), known as the Pipotron Brothers (ピポトロンブラザーズ) in Saru Get You ~On Air~ 2nd, and known as the Apetrons in Ape Quest, are a group of monkeys, introduced in Ape Escape: Pumped & Primed. They are new mysterious monkeys with strange abilities.

In a jungle, the Mystery Man kidnaps 3 monkeys for his experiment. They are named the "Pipotrons", and were created for one purpose only; Kidnap Helga's dad to get the disk.

The Pipotrons break into Helga's house (while she wasn't home), and takes her father away. After discovering that Helga's dad doesn't have the disk, they find out that the disk is in the trophy in the High-Tech Tournament. The Pipotrons are ordered to win the tournament and get the disk.

The Pipotrons join the tournament, and participates in various events. At the end of the tournament, the Pipotrons steal the trophy, and discover the disk. The Pipotrons give it to a super computer virus called Grid Core, who wants to conquer the world. However, once he has the disk, the Mystery Man decides that the regular Pipotrons deserve the same fate as the others. The new villain introduces a new tournament (aka the virus-tech tournament), where the characters are fighting for their very lives while getting closer to the villain's lair. The Pipotrons, along with the other characters, reaches the new villain (in the form of Grid Core) and defeat him, the virtual world turns back to normal. The Pipotrons disappears, with their whereabouts unknown.

The Pipotrons appears in Million Monkeys to help Specter.

The Pipotrons are the antagonists of Ape Quest. Here, they are named the Apetrons.

Saru Get You ~On Air~ 2nd Edit

The Pipotrons are the antagonists of the first eight episodes.