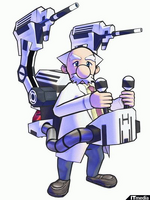 The Professor, known in Japan as Hakase (ハカセ) is a well-known scientist, who is a recurring character in the Ape Escape series, and Natalie's grandfather. He is responsible for the creation of the Time Station, as well as the Peak Point Helmet and Casi respectively.

The Professor is portrayed as a senior adult male. He has a grayish-white mustache, and has fair skin for his respective age. He is rather pudgy, but not overly obese and is known for his massive balloon sized nose. He has smaller eyes in comparison to half of the cast that are blue-gray in color. He wears a plain, opened lab coat over a yellowish shirt and red tie.

He has changed his usual attire on rare occasion, such as when he was on vacation in AE2, in which he wore a tropical orange shirt with red flowers.

The Professor is a very odd man who creates and makes the gadgets responsible for saving the world. The Professor has a good heart and only has everyone's best interests in mind. He envisions a safe and happy world, and only tends to be serious when it is of the utmost importance, such as protecting the people he cares about. Besides creating gadgets, the Professor also sets up training rooms, mailbox messages, and other little things in order to help Spike.

However, the Professor also happens to be somewhat of a klutz and airhead in terms of personality. He can be goofy or absent-minded at the rarest of times. He even once admitted that Natalie would be better than him due to her navigational skills. This also led to him accidentally leaving behind the Pipo Helmet, allowing Specter to find it.

In the anime, he is shown to be very emotional, almost bipolar. However, he also showcases moments of being intelligent and knowledgeable.

Professor was preparing to show Spike and Jake his newest invention, a time machine! When suddenly, Specter showed up and used it to travel back into time, thereby sucking them into the past with him and his monkeys. It was then he decided that Spike most stop the evil apes from taking over the world and re-writing history.

Later in the game, he and Natalie were kidnapped by Specter and taken later to a bizarre theme park called "Specter Land" (it is likely that this Specter Land is the same place as Monkey Park but was re-modified by Specter to challenge Spike's attempt in rescuing the Professor, Natalie, and Jake). The Professor was being held captive at Specter Circus, a place in Specter Land which had a very odd spiraled cage, guarded by a twisted clown that Spike had to defeat in order to free him.

In Ape Escape 2, The Professor leaves on a vacation. He tells Jimmy and Natalie to watch over the lab, and deliver Monkey Pants to Monkey Park. In his absence, the lab was destroyed, and Jimmy not only delivered Monkey Pants, but also Pipo Helmets as well. Later while he is out, Jimmy runs into the Professor and is informed that he was at Casino City as part of his vacation. After Jimmy explains what happened, he quickly returned to the lab to help Jimmy.

The Professor only makes a cameo appearance with both Spike and Jimmy. The three of them have been taken over by the "couch potato" syndrome by watching the Specter TV channels. Thus, Aki fulfills his role by providing the main protagonists with gadgets in his place.

The Professor is a member of Team Spike. In this game, he uses a mech to aid him similar to how he was in Pumped and Primed.

Specter kidnaps the Professor, Aki, Yumi, Kei and Jimmy and shrinks the Laboratory with Spike and Natalie still inside of it. The two of them need to work together in order to save the others. The Professor is held captive by White Monkey.

Since The Professor is an important character, he appears in nearly every episode. He consistently works on making improvements to gadgets and items as evident by how many different Time Net's showcased throughout the series. However, he has a more a bit more goofy demeanor, similar to the personality of Spike.