The Tank is a vehicle introduced in Ape Escape. It made subsequent appearances in Ape Academy 2, Ape Escape 3, and Ape Escape: Pumped & Primed.

In Ape Escape, The Tank is a green tank with the Professor's logo on it.. In Ape Escape, it takes the likeness of a teal elephant, which is changed to a dark blue camo in Ape Escape 3.

In Ape Escape: Pumped and Primed each character has their own tank to fit their style. Spike's tank is identical to his one in Ape Escape, sans professor logo.

The treads of the Tank are controlled by their respective analogue sticks. Pushing them both forward directs the Tank forward, pushing them both backward puts the tank in reverse, and putting them in opposite directions turns the tank. 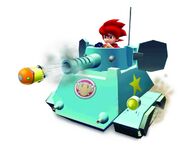 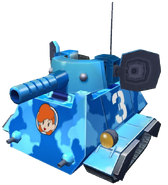 Add a photo to this gallery
Ape Escape Franchise