Information
The Time Net, sometimes called Monkey Net or the Gotcha Net, and known in Japan as the Get Net/Get Ami (ゲットアミ) is the most essential Gadget for all Ape catchers to have in their arsenal. Throughout the series, the use and appearance of the Time Net generally remain the same with minor name differences or appearance change. An alternate form of this upon reaching the water is the Aqua Net.

Its appearance is a basic long blue shaded rod with a silver rounded part on the top with a net. In Ape Escape 1 and On the Loose, its physical appearance looks slightly less detailed with its rod and top-rounded part being gray. The net part has a cyan-colored glow. Starting with Ape Escape 2 and onwards, the net part itself has a more animated glow to it.

The Time Net is a special net made by the Professor and adjusted by Natalie. It primarily works like a regular net, by swinging it on the specified target. However, it differs in a sense that upon catching the target, it sends them to the Ape holding area, a "paradise room" of some sort until they're all gathered.

In Ape Escape 3, a monkey can sometimes grab the net and use it against you (see picture above). When this happens, they will chase you with the net and attempt to catch you with it. If the monkey succeeds in catching you, you will be sent back to the TV Station.

In Saru Get You ~On Air~, the Time Net is called the Get Net. It is a plain rod used to make carrying it easier. When the button on the bottom was hit, the top half would pop out. At first it was very simple and basic. Jake has a very special golden net that he personally made for himself since he thought it would impress Natalie if he could catch the monkeys. Natalie was unimpressed but soon got worried upon realizing it wasn't at all like the original ones, basically being just a "flashy knockoff". In the next episode, a normal blue net was given to Jake in order to catch apes with Spike and the golden net was never seen again.

Another variation of the Time Net is a special space themed one. It looks the same as a normal net but the rod is purple. Instead of small red markings by the net, they are green colored. The net retains its blue color.

Another variation of the Time Net is called "The Ultimate Super Net Get!". It was made by Professor in order to capture Specter/Kuuta. This particular Net has an orange theme. Including the net itself.

Time Net's appearance in On the Loose.

The Time Net in Ape Escape.
Add a photo to this gallery 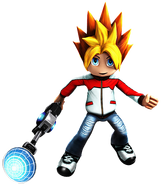 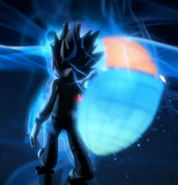 Retrieved from "https://sarugetchu.fandom.com/wiki/Time_Net?oldid=12457"
Community content is available under CC-BY-SA unless otherwise noted.