The Time Station is where the whole story begins. The last invention from the Professor was finished, but he and Natalie were captured by Specter and his monkey army. The Time Station itself is divided into several areas:

In the Beta version (or the demo released in the Pizza Hut disc), the stage selection has its own room, the warp room. The reason why the development team removed this dark room is currently unknown.

The Time Station appears as a stage in PlayStation All-Stars Battle Royale. The appearance, however, is based off it's appearance in the Ape Escape cutscene, and not the hub world. In the background, Specter uses the time portal to summon various creatures, such as the Ciokina from Patapon, a Lurker Shark from the Jak and Daxter series, a Harpy from God of War III, a Vermin truck from Twisted Metal and a Warhawk ship from Warhawk. Pipo Monkeys were seen with every summoned creatures. Eventually, he summons the Satan Chimera from the Resistance franchise, which serves as the main stage hazard. It attacks the players by spewing green bile from its mouth as Specter laughs maniacally. Shortly before the end of the match, the Satan Chimera will be pulled back into the portal, and the Time Station malfunctions and eventually falls apart, leaving Specter to sit and mope over his failure.

Natalie and the Professor makes a cameo on the computer screen on the left of the stage. 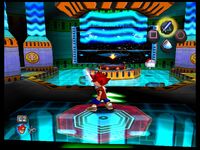 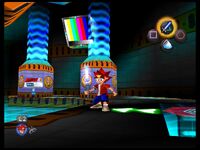 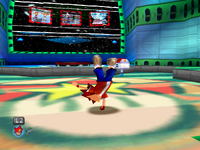 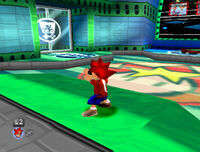 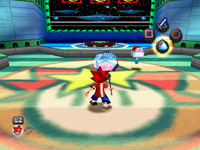 Ape Escape: On the Loose Edit